Ye stiff-necked and uncircumcised in heart and ears, ye do always resist the Holy Ghost, as your fathers did, so do ye. Act 7:51.

A resistance is encountered by

Yeshua’s modern-day disciples. When plain arguments and truths provoke the opposers of the gospel, they should be taught their guilt and danger. They, like their fathers, were stubborn and willful.  There is in our sinful hearts, a resistance to the Holy Ghost, a flesh which lusts against the Spirit, and wars against his motions; however in the hearts of God’s elect, when the

fulness of time comes, this resistance is overcome. We will find how an unhumbled heart is like ground untilled. And recognize it is ground which may be improved; it is our ground leased to us, but it is fallow; it is over-grown with thorns and weeds, the natural product of the corrupt heart.

Father in heaven we bring before your throne our iniquities and place them at your feet so we might be shown the truth and our hearts softened and rid of them. Be

with us Lord that we might receive your guidance to a renewed discernment, remove from us all doubt and fears. Replace them with knowledge, understanding and your love. As we have prayed Lord to bring us to still waters that you might restore our souls. Instruct us through the Holy Spirit so we might find the path of righteousness in your name’s sake. This we pray in the name of Yeshua, Amen, and Amen.

Let us call on the Lord to create in us a clean heart, and to renew a right spirit; for except a man be born again, he cannot enter into the kingdom of heaven. The Holy Spirit lead me to Acts 4:4 and the Bible commentary relates the following: And here we see Satan, and the wicked have liberty granted them to rage against the children of God, yet can they not prevail. But God does further and promote the kingdom of his Son Yeshua who gathers together his sheep.

But we see a few men unarmed, furnished with no garrisons, show more power in their voice alone, then all the world, by raging against them. The example shown here by the Apostles is to wonder the faithful should not be terrified with the present danger and discouraged from taking up the sword of Yeshua together with

faith. Even though they were novices at the time faced the difficulty of their task and eventually had swayed some 5000.

We hear from Matthew Henry (1662 -1774), “The apostles spoke so plainly, with such evidence and proof of the Spirit, and with such power; so warmly, and with such concern for the souls of men; that those who heard them could not but say, God was with them of a truth. Yet the success was not to be reckoned to the manner of their preaching, but to the Spirit of God who used that means. Perseverance in doing good, amidst dangers and hardships, is a blessed evidence of grace. Wherever God’s servants are driven, they should seek to declare the truth. When they went on in Christ’s name and strength, he failed not to give testimony to the word of his grace. He has assured us it is the word of God, and that we may venture our souls upon it. The Gentiles and Jews were at enmity with one another, yet united against Christians. If the church’s enemies join to destroy it, shall not its friends unite for its preservation? God has a shelter for his people in a storm; he is and will be their Hiding-place. In times of persecution, believers may see cause to quit a spot, though they do not quit their Master’s work.”

All things are possible to those that believe. When we have faith, that most precious gift of God, we shall be delivered from the spiritual helplessness in which we were

born, and from the dominion of sinful habits since formed; we shall be made able to stand upright and walk cheerfully in the ways of the Lord. When Christ, the Son of God, appeared in the likeness of men and did many miracles, men were so far from doing sacrifice to him, that they made him a sacrifice to their pride and malice; but Paul and Barnabas, upon their working one miracle, were treated as gods. The same power of the god of this world, which closes the carnal mind against the truth, makes errors and mistakes find easy admission. We do not learn that they rent their clothes when the people spake of stoning them; but when they spake of worshipping them; they could not bear it, being more concerned for God’s honor than their own. God’s truth needs not the services of man’s falsehood. The servants of God might easily obtain undue honors if they would wink at men’s errors and vices, but they must dread and detest such respect more than any reproach.

John relates the miracle of feeding the multitude, for its reference to the following

discourse. Observe the effect this miracle had on the people. Even the ordinary Jews expected the Messiah to come into the world, and to be a great Prophet. The Pharisees despised them as not knowing the law, but they knew most of Him who is the end of the law. Yet men may acknowledge Yeshua as that Prophet, and still turn a deaf ear to him.

ere were Yeshua’s disciples in the way of duty, and Yeshua was praying for them, yet they were in distress. There may be perils and afflictions of this present time, where there is an interest in Yeshua. Clouds and darkness often surround the children of the light and of the day. They see Yeshua walking on the sea. Even the approaches of comfort and deliverance often are so mistaken, as to become the occasions of fear. Nothing is more powerful to

convince sinners than that word, “I am Yeshua whom thou persecutest;” nothing more powerful to comfort saints than this,“I am Yeshua whom thou lovest.” If we have received Yeshua the Lord, though the night is dark, and the wind high, yet we may comfort ourselves, we shall be at the shore before long.

The utmost earnestness should be employed in seeking salvation, in the use of appointed means; yet it is to be found only as the gift of the Son of man. Him the Father has sealed proved to be God. He declared the Son of man to be the Son of God with power. Constant exercise of faith in Yeshua is the most critical and 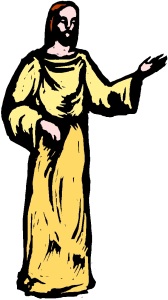 challenging part of the obedience required from us, as sinners seeking salvation. When by his grace we are enabled to live a life of faith in the Son of God, holy tempers follow, and acceptable services may be done. God, even his Father, who gave their fathers that food from heaven to support their natural lives, now gave them the true Bread for the salvation of their souls. Coming to Yeshua, and believing on him, signify the same. Yeshua shows he is the true Bread; he is to the soul what bread is to the body, nourishes and supports the spiritual life. He is the Bread of God. The bread which the Father gives, which he has made to be the food of our souls. Bread nourishes only by the powers of a living body, but Yeshua is himself living Bread and nourishes by his own power. The doctrine of Yeshua crucified is now as strengthening and comforting to a believer as ever it was. He is the Bread which came down from heaven. It denotes the Divinity of Yeshua’s person and his authority; also, the Divine origin of all the good which flows to us through him. May we with understanding and earnestness say, Lord, evermore give us this Bread.

The blessed end and design of our Lord’s sufferings were, to reconcile us to God, and to bring us to eternal glory. He was put to death in respect of his human nature but was quickened and raised by the power of the Holy Spirit. If Christ could not be freed from sufferings, why should Christians think to be so? God takes exact notice of the means and advantages people in all ages have had. As to the old world, Christ sent his Spirit; gave warning by Noah. But though the patience of God waits long, it will cease at last. And the spirits of disobedient sinners, as soon as they are out of their bodies, are committed to the prison of hell, where those that despised Noah’s warning now are, and from whence there is no redemption.

Heavenly Father we ask for your compassion to continue with us over a long period of time. Within your mercies Lord we pray, You will minister deep courage and knowledgeable passion to support our determination to complete our mission of sharing your love and forgiveness in your name. Fill our words with the resonating sound of heavenly trumpets praising you Father so those within the darkness will hear and turn. This we pray in the name of Yeshua Amen and, Amen.

The following verse in 1Peter 3:22 sums it up better than anyone could: Who is gone into heaven, and is on the right hand of God. Angels and authorities and powers being made subject to him. (Yeshua). Thank you, Yeshua for your gift so willingly given.

Remember these articles are published by an obedient servant. Thank you for your courage in seeking truth and Eternal life. Never stop building your relationship with our Savior recognize each chapter and verse you research is drawing you closer to Him. May all go in peace, knowledge and God’s compassion. Genesis 9:28 And Noah lived after the flood three hundred and fifty years. And all the days of Noah were nine hundred and Fifty years and he died. All things are possible with God.

Yeshua, as a Watchman. This I pray for all. ” Our Heavenly Father brings us to the river which bringeth forth fruit so we may partake of its sustenance and be filled spiritually with nurturing wisdom and humble dedication in service to Yeshua. “Blessings to All.” As you go forward in peace, knowledge, and strength
View all posts by Yeshua's Watchman →
This entry was posted in SPIRITUAL AWARENESS. Bookmark the permalink.

This site uses Akismet to reduce spam. Learn how your comment data is processed.